Both language poetry and minimalism, with their attention to the small particles of writing, produced in the 1970s a lot of journals with names that were a single syllable or at least a single irreducible word. In 1984 that kind of title felt austere and predictable. We jammed together some little photocopy imprint titles and came up with Jimmy & Lucy’s House of “K.” It began as a journal for poets writing about other poets. It quickly fetched up all sorts of odd prose items: writing that wasn’t quite essay, or manifesto, or epistle. The content strayed too—pieces on contemporary music, obituaries (not just poets but astrologers, musicians, experimental filmmakers, Buddhist lamas), hashish in Afghanistan, animal rights, vinyl record collections, and military slang.

Since the journal ran hardly any poetry, but that’s what most of its contributors wrote, we began to include in each issue a fugitive little chapbook by individual authors. It was hard to keep track of these inserts, which got produced in different sizes and shapes, and on a different schedule than the magazine, so journal issues and their chapbook accompaniments often got separated. Let the bibliographers figure this one out, we said. We titled the inserts “Lucy Has More Fun.”

If the titles seem juvenile, the work of producing the magazines was anything but. Ben had an old IBM Executive typewriter, huge heavy machinery, its keys badly worn. Its chief virtue was that it laid out letters so they resembled typesetting. Most typewriters have a uniform width for every key, but the Executive had variable spacing, so thin letter i or l got two spaces, thick m or w got four. The rest of the production was Exacto knives, white-out, and rubber cement. Then we photocopied it on legal-size paper. The crew at Krishna Copy in Berkeley took a liking to us. They gave us very cheap prices for copies, and let us use their industrial paper cutter, saddle stapler, and other tools that we needed. There is no way to know how many copies of each issue we made. Typically we’d make a first batch to cover subscribers, which included some libraries, and a few to drop off at local bookshops. When we ran out we’d head down to Krishna and make up another ten or twenty. Surely no issue had more than two or three hundred copies. Of the nine issues, each third one was a special theme issue. Number three greeted Robert Duncan’s return to publishing with Ground Work: Before the War, after his book moratorium of fourteen years. A review that the San Francisco Chronicle had requested from Ronald Johnson, then rejected as too esoteric, was emblematic of the kinds of things we could and did publish. Issue six commemorated the fifty titles Lyn Hejinian had published (and printed) under the Tuumba Press imprint. We got somebody to write on almost every one of the Tuumba chapbooks. Issue nine, our final one, carried the transcript of a weekend on Buddhism and poetry that Norman Fischer had put on at Green Gulch Zen Center. For this, “The Poetics of Emptiness,” David Sheidlower printed a letterpress cover, using Lyn Hejinian’s old Chandler & Price platen press.

Nada Gordon proofread with us. Pat Reed and Stephen Rodefer occasionally helped with typing, or cut and paste. Lots of the young experimental writers around the East Bay, alongside language poetry elders, contributed the writing. Some of the New American poetry generation gave us pieces as well. Larry Eigner, Leslie Scalapino, Charles Bernstein, Rachel DuPlessis, Philip Whalen, Nathaniel Mackey, Susan Howe, Carla Harryman, Bob Grenier, and always work by the editors, typists, and proofreaders. Nobody ever questioned how homemade, funky, or non-establishment the thing looked. The first push toward Joglars came in the summer of 1963 at Vancouver in Warren Tallman’s kitchen. Charles Olson was telling a bunch of young poets how we ought to start a magazine to publish poets’ correspondence, specifically that between Charles and Bob Creeley. So Fred Wah, Michael Palmer, and I began discussing a possible three-way editorship. But when we all got home the plan broke in two, Fred starting Sum in New Mexico and Michael and I Joglars from Cambridge (MP) and Providence (CC). We did the first two issues together and then I did the third one myself when Michael went to Europe. The title came from Michael, and his interest in the Troubadours. Like most starting poets I think we wanted primarily to find and show more of the work we were fascinated with (it was such a rich period, compared to now) plus get in touch with the poets who were writing it. Issue 3 shows my increasing interest in the younger New York School poets, and a brief brush with the Concrete movement. And now it strikes me as odd that we didn’t publish Olson in the magazine. Or Creeley. A life of its own. Jonathan Williams describes himself as “a poet, essayist, publisher of the Jargon Society, photographer, occasional hiker of long distances, and aging scold.” Jargon’s first booklet, which contained a poem by Williams with an engraving by David Ruff, was published in San Francisco in 1951. The press blossomed at Black Mountain College where its peripatetic director moved to study photography with Harry Callahan and Aaron Siskind. Jargon’s second publication was a poem by Joel Oppenheimer (“The Dancer”) with a drawing by Robert Rauschenberg. Over the next several years the press would publish Kenneth Patchen, Robert Creeley, The Maximus Poems by Charles Olson, more work by Williams, Louis Zukofsky, Denise Levertov, Michael McClure, Mina Loy, Robert Duncan, Fielding Dawson, Irving Layton, Guy Davenport, Paul Metcalf—the list goes on and on. The Jargon Society married excellence in the art of book-making with important writing, to become what critic Hugh Kenner aptly called “the custodian of snowflakes.” When asked why he has published what he has, Williams replied, “For pleasure surely. I am a stubborn, mountaineer Celt with an orphic, priapic, sybaritic streak that must have come to me, along with H. P. Lovecraft, from Outer Cosmic Infinity. Or maybe Flash Gordon brought it from Mongo? Jargon has allowed me to fill my shelves with books I cared for as passionately as I cared for the beloved books of childhood—which I still have: Oz, The Hobbit, The Wind in the Willows, Dr. Doolittle, Ransome, Kipling, et al.” Sorrentino, Gilbert. The Darkness Surrounds Us. 1960. (Not in series.) Cover by Fielding Dawson.

Jargon also published the following, in association with Corinth Books: 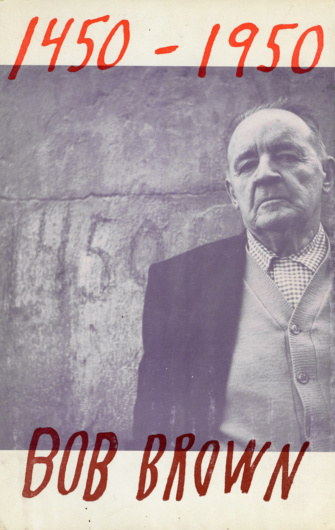 Zukofsky, Louis. A Test of Poetry. 1964. Originally published in 1948 by the Objectivist Press.

For a more complete listing of the early Jargon publications, the reader is referred to: Millicent Bell, “The Jargon Idea,” Books at Brown 19 (May 1963, reprinted separately, 1963); and to J. M. Edelstein, A Jargon Society Checklist 1951–1979, published in conjunction with an exhibition of Jargon publications at Books & Co., New York City, March 15–April 14, 1979.

Journal for the Protection of All Beings: A Visionary and Revolutionary Review

Journal for the Protection of All Beings: A Visionary and Revolutionary Review 3 (1969). Cover drawing by Eugene Hawkins Legend. Similar in spirit and philosophy to Ark II/Moby 1, the Journal for the Protection of All Beings was one of the first radical ecology journals. The brainchild of Michael McClure and David Meltzer, it melded the anarchist thought of the 1950s (The Ark) with the pacifism evidenced in the very early journal The Illiterati, published in the late 1940s by Kermit Sheets and Kemper Nomland at the camp for conscientious objectors in Waldport, Oregon. The newest element in the mix was work from the San Francisco Renaissance poets. The first issue led off with Thomas Merton’s “Chant to be used in procession around a site with furnaces” and included work by all three editors as well as an interview with Allen Ginsberg by Gregory Corso, an interview with Ginsberg and Corso by William S. Burroughs, and Gary Snyder’s “Buddhist Anarchism.” This issue also reprinted two famous documents, Percy Bysshe Shelley’s “Declaration of Rights” and the famous statement by Chief Joseph of the Nez Perce Indians. Journal for the Protection of All beings: A Visionary and Revolutionary Review 1 (1961). In many ways the most beautiful of all the mimeo magazines, J had an eight-issue run. The first five issues were edited from North Beach bars by Jack Spicer with Fran Herndon as art editor. Spicer, who embodied the spirit of poetry in the Bay Area, collected pieces for his magazine from a box marked “J” in The Place, a bar at 1546 Grant Avenue in San Francisco. A refugee from Los Angeles with two degrees from Berkeley, he had been a student of Josephine Miles there in the mid-1940s. They became close friends, and Spicer participated in the Friday afternoon poetry readings in Wheeler Hall during the late 1940s as well as the readings organized with Rockefeller money at San Francisco State by Ruth Witt-Diamant at the new Poetry Center at San Francisco State.

Into the cauldron of poetic politics surrounding Miles, Kenneth Rexroth, Robert Duncan, Lawrence Ferlinghetti, and others, Spicer introduced his freest of spirits, sometimes more Caliban than Ariel. Spicer lived for words (even making his living as a research assistant on a lexicographical project at Berkeley). He could be found most evenings in one of the North Beach bars or coffeehouses leading the discussion on poetry, poetics, myth, linguistics, and other mysteries. Like Blake and Yeats (with the help of Mrs. Yeats), Spicer attempted to clear his mind and open himself to “dictation” from other sources, which he devotedly pursued. Spicer also believed wholeheartedly in the necessity of human beings’ helping each other through communication, which he confronted in the editorship of J, a little newsletter of the poetic spirit. Donald Allen acted as J’s distributor in New York (“New York Contributions are not forbidden. But quotaed”), selling copies for Spicer to the Wilentz brothers of the Eighth Street Book Shop. In an early letter to Spicer, Allen eagerly wondered “what your editorial policy may be. Seduction by print.”

“His parents were professional bridge players from Southern California.”

— Josephine Miles on Jack Spicer, from an unpublished manuscript in the collection of the Bancroft Library, University of California, Berkeley J, no. 1. From Joanne Kyger’s collection, in binder of her creation. Jack Spicer listening to a baseball game on the radio at the beach at Plum Island, Newbury, Massachusetts, ca. 1958. Photograph by Kent Bowker.