Among those writers at the 1955 reading at the Six Gallery in San Francisco were, of course, both Allen Ginsberg and Jack Kerouac. Both were to become literary idols of a generation, and both were heavily connected to life in the West. Ginsberg’s poem Howl had been written on Montgomery Street in San Francisco, where he was to meet his lover and companion, Peter Orlovsky. Kerouac’s most famous books all deal in one way or another with the myth of the West and its place in the American imagination. However, Kerouac and Ginsberg, who, with William S. Burroughs and Gregory Corso, were to form the nucleus of the Beat writers, had met in the 1940s in New York City, where they had begun their writing as well. New York was to become a Beat capital in the 1950s, with its plethora of coffeehouses and jazz bars, where poetry was occasionally performed, with or without musical accompaniment. LeRoi Jones started the little magazine Yugen in 1958 with Hettie Cohen, and its pages were full of writings by core Beat writers, including Kerouac, Burroughs, Orlovsky, Snyder, and Whalen, as well as Jones himself. In 1961, Jones and Diane di Prima started the mimeo magazine The Floating Bear, early issues of which were typed up by di Prima and produced on the mimeograph machine at Robert Wilson’s Phoenix Bookstore in New York in exchange for finished copies of the magazine. Jones and di Prima intended their “newsletter” to be an engine for quick and informal communication, particularly for younger and unpublished experimental poets who practiced “the open and implied rebellion—of form and content.” The Floating Bear 9 (October 1961) was apparently a little too rebellious for the authorities, as it contained an excerpt from Jones’s The System of Dante’s Hell and Burroughs’s Routine. Jones was arrested and charged with sending obscene material through the US mails. But he was not indicted by the grand jury, who listened patiently to his reading great literature of all types, once deemed obscene. The Floating Bear had a bold and colorful editorial style, and a simple design. It emphasized the publication of new work from a variety of sources, be they Black Mountain, Beat, San Francisco Renaissance, or New York School. 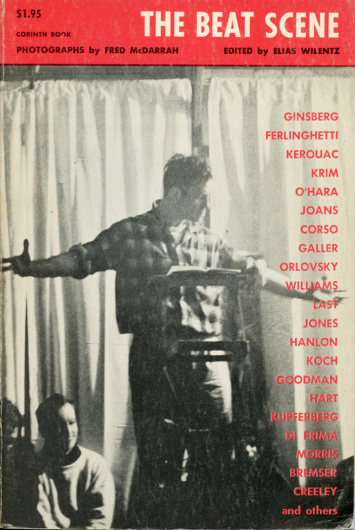 The Beat Scene, edited and with an introduction by Elias Wilentz (New York: Corinth Books, 1960). Photographs by Fred McDarrah. Jack Kerouac’s On the Road published by Viking

Beat article in Esquire: Jack Kerouac on the term “Beat”

The Beat Generation and the Angry Young Men, edited by Gene Feldman and Max Gartenberg, published by Citadel

The Gathering of the Tribes for a Human Be-In, Golden Gate Park, San Francisco