Roof was to hold all the different writing tendencies under it. The first issue included many of America’s best-known writers of the time: Ashbery, Creeley, Duncan, and Ginsberg to name a few. It also contained many new writers who were at Naropa for that session. The well-known writers were supportive of what I was doing so long as it furthered the aims of their writing, but they were not supportive of alternative tendencies in writing that cut across the grain of the established conflict in American letters. (At the time, the conflict was between the day-to-day personism of the New York School/Beat group against the “Academic” modernism. Looking back on it today, we see the conflict as the two sides of the Objectivist tendency, but then it was a serious cultural conflict between liberal academics and the counterculture.) I did not feel that the established writers were interested in the same issues as the younger writers, so for the second issue of Roof I put out the word that I was publishing new writing by new writers. I met and published Bruce Andrews, Charles Bernstein, and Ron Silliman, and others of what was to become language poetry. 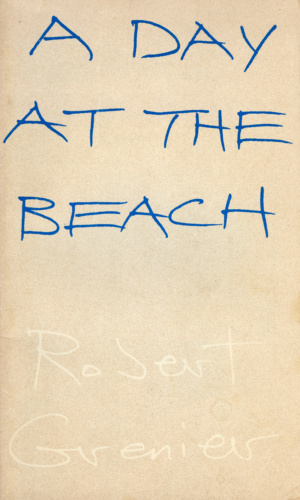 Robert Grenier, A Day at the Beach (1984). Copublished with the Segue Foundation.

Soon after I published the third issue of Roof, Andrews and Bernstein started L=A=N=G=U=A=G=E, a magazine devoted to critical writing by poets. The energy of the moment swung decisively in the direction of a more complex and political prosody as opposed to simplified prosody with political or personal content. The tendency included a group of about ten poets in New York, twenty in the Bay Area, five in D.C., and a few others scattered about the country and in Canada who began to read each other in a different way than we read any other poetry. In the beginning of language writing, there were public “Talks” and private meetings to discuss what poetry might be, and publications like Roof, L=A=N=G=U=A=G=E, This, Hills, and Sun & Moon to publish and promote it. People began to derisively call it a school and attack both its methods and its politics, but it was clear that most, not all, of the talented younger writers were interested in these issues. I began to publish longer sections of people’s work at the same time that the poets were writing longer pieces, and grouping poets by geography. In 1978, I began to publish books, with my own Part Songs. Since then, Roof has published about one hundred books, including several by Ron Silliman, Bruce Andrews, Hannah Weiner, Kit Robinson, Bob Perelman, Jackson Mac Low, Nicole Brossard, and Diane Ward. Roof is also known for critical books such as Bernstein’s edited The Politics of Poetic Form: Poetry and Public Policy, Alan Davies’s Signage, Steve McCaffery’s North of Intention, and Ron Silliman’s The New Sentence.

Grenier, Robert. A Day at the Beach. 1984. Copublished with the Segue Foundation.

Scans of the complete run of Roof are available on the Roof page at Jacket 2.