Named for Winnie-the-Pooh’s boat made of a honey pot (“Sometimes it’s a Boat, and sometimes it’s more of an Accident”), The Floating Bear, started in February 1961, was a mimeographed “newsletter” distributed by mailing list whose mission was the speedy dissemination of new literary work. Under the editorship of Diane di Prima and LeRoi Jones (guest editors included Billy Linich [a.k.a. Billy Name], Alan Marlowe, Kirby Doyle, John Wieners, and Bill Berkson), twenty-five issues came out in the magazine’s first two years. Contributing writers included Charles Olson, Robin Blaser, Robert Creeley, Philip Whalen, Paul Blackburn, and Ed Dorn, while Ray Johnson and Wallace Berman were among the many visual artists whose work was presented. This tremendous output was due at least in part to Jones’s experience as editor at Yugen and Totem Press and to his voracious working habits. Di Prima recalls, “LeRoi could work at an incredible rate. He could read two manuscripts at a time, one with each eye. He would spread things out on the table while he was eating supper, and reject them all—listening to the news and a jazz record he was going to review, all at the same time.” Occasionally a group would convene to put out the Bear. “In the winter of 1961–62, we held gatherings at my East Fourth Street pad every other Sunday. There was a regular marathon ball thing going on there for a few issues. Whole bunches of people would come over to help: painters, musicians, a whole lot of outside help. The typing on those particular issues was done by James Waring, who’s a choreographer and painter. Cecil Taylor ran the mimeograph machine, and Fred Herko and I collated, and we all addressed envelopes.” One of the recipients of Bear 9 was Harold Carrington, a poet who was in prison in New Jersey. The censor read his mail and objected to the contents of the issue, which included Jones’s The System of Dante’s Hell and William S. Burroughs’s Routine. Jones and di Prima were subsequently arrested on obscenity charges on October 18, 1961. Di Prima remembers, “I heard a knock on my door early in the morning which I didn’t answer because I never open my door early in the morning in New York City. In the morning in New York City is only trouble. It’s the landlords, it’s Con Edison, it’s the police, it’s your neighbors wanting to know why you made so much noise last night, it’s something awful, and before noon I never open my door.” There was a grand jury hearing, but after Jones’s two-day testimony, they failed to return an indictment. Jones resigned from The Floating Bear in 1963 after issue 25. Di Prima moved briefly to California in 1962 and the magazine came out irregularly over the next several years, culminating in a very large issue in 1971 guest-edited by Allen De Loach in Buffalo. It was called The Intrepid-Bear Issue: Intrepid 20/Floating Bear 38. 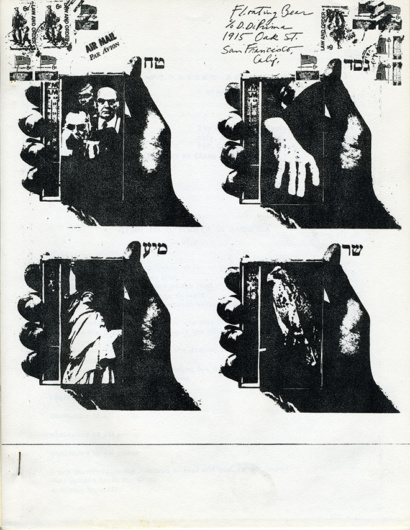