My career as a writer burgeoned as one of the LIGHT YEARS poets who met at the Deux Mégots Coffeeshop in the East Village in the 1960s. We read our work aloud weekly and were published in early magazines of the “Mimeo Revolution,” as well as in traditional media. By 1970, I knew that half of us had moved into prose, with a plethora of eager experimentation in modes hitherto unexplored, and I sensed there was a place for a magazine to represent this new writing. The first issue of Center set the tone: I invited friends to send me “non-form prose from known writers, exciting work unacceptable in the usual media”…Susan Sherman produced number 1 on a mimeo machine: thirty-four pages; the response was so enthusiastic that numbers 2 and 3 went to fifty-two and sixty-two pages, which established the median size of issues. I printed an issue when I’d received “enough” interesting manuscripts. If a piece excited me, I felt it would interest, excite, and challenge my peers to try new ways to create, to innovate. Center became a forum for writers whose avant-garde ideas have become, over the ensuing years, part of the tradition in literature. 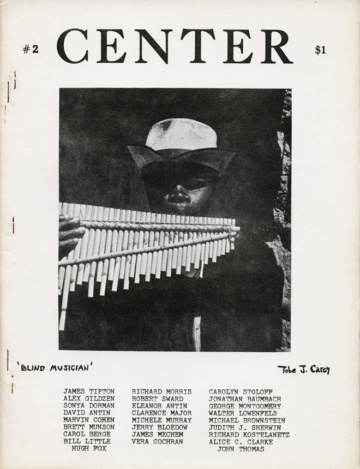 Of the 150 writers published in Center, about sixty have produced books since 1970 containing material which was first seen in its pages. Writers wanted to be published in it. The print run was always tiny, from 200 to 450 copies, yet the circulation was triple that, because copies circulated hand-to-hand, mind-to-mind, in a flurry of excitement. Editing and publishing Center, from 1970 to 1984, was a joy: the energy produced by the writing coming to my desk in Woodstock (1970–74) and five subsequent loci was an intensely stimulating ingredient in my life. I met many incredibly talented people through their writings, many of whom became close friends. Generous grants to publish plus pay the authors came from the NEA through the Coordinating Council of Little Magazines starting with number 2, and I went to offset and saddle-stitch or perfect-binding through number 13 (the “Final Issue”). In the 1980s there were two Center Chapbooks of new prose, and in the early 1990s Center Press published two books of innovative fiction by other writers, and copublished with Tribal Press my own collected fiction, Zebras, or, Contour Lines—these are all Center magazine offshoots. It has been a steady stream for twenty-seven years of applied devotion to adding to the literature, with lovely perks alongside.